Getting the Best Refinancing Deal

Getting the Best Refinancing Deal

There has never been a better time to refinance your mortgage. Rates are at record lows. The government is devising new programs to help homeowners. The economy and job market are improving, albeit slowly. 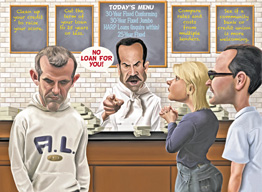 In theory, those factors should be producing a boom in mortgage refinancing. But locking in a deal is proving to be a challenge these days—even for well-heeled homeowners.

That is because low appraisals and tight lending standards are making it difficult for many borrowers to refinance, even if they have good credit and substantial assets. Even those who meet these hurdles can face frustrating waits.

The good news is that borrowers aren’t powerless in the process. By shifting assets to your mortgage lender, cleaning up your credit and understanding the new government programs, you can improve your chances of scoring a good refinance deal.

“The reward in the end is substantial, provided you can survive the process,” says Keith Gumbinger, a vice president at mortgage-data provider HSH.com.

Today’s interest rates are a powerful lure even for homeowners who bought or refinanced a home recently. The average rate on a 30-year fixed-rate conforming mortgage is 3.84%, down from 4.22% in mid-March and the lowest level in at least 60 years, according to HSH.com. 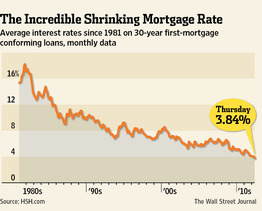 The latest drop in rates has created a big pool of potential borrowers. All told, about 20.5 million homeowners have mortgages with rates above 5% and are current on their loan payments, according to real-estate data and analytics company CoreLogic, making them good candidates for a refinance. Another 12.9 million have rates between 4% and 5%.

Lance Roberts, a money manager who lives in a Houston suburb, locked in a 5.25% rate when he refinanced his mortgage at the end of 2010. Now he is refinancing again, to a loan with a rate of about 4%. “I was great,” he says, “but at 4%, I’m doing even better.”

As a general rule, anyone who can find a deal that will recapture the closing costs within 18 months should “just do it,” says Lou Barnes, a mortgage banker in Boulder, Colo.

Many borrowers haven’t been able to take advantage of lower rates because they are “under water,” meaning they owe more than their homes are worth. But some of these homeowners might soon get relief. Five of the nation’s biggest banks—Ally Financial, Bank of America, Citigroup, J.P. Morgan Chase and Wells Fargo —are required to refinance certain underwater borrowers as part of a $25 billion settlement of the government’s investigation of questionable foreclosure practices.

To qualify, borrowers must be current on their mortgage, have a loan owned and serviced by one of the five banks that was originated before Jan. 1, 2009, and meet other requirements.

Borrowers can expect savings, but the banks aren’t required to give them today’s rock-bottom rates. Under the settlement, the new rate must be at least 0.25 percentage point lower than the borrower’s existing rate, or decrease monthly payments by at least $100, though Ally and Citigroup say they will generally be refinancing borrowers into new loans with market rates under the program.

A home for sale in Virginia, outside Washington

The Obama administration also has been pushing to make it easier for borrowers with loans backed by government-controlled mortgage companies Fannie Mae and Freddie Mac to refinance, even if they don’t have any equity in their homes or strong credit. Changes that took effect this year allow borrowers who owe more than 125% of their home’s value to refinance under the government’s Home Affordable Refinance Program, or HARP.

Other changes have made the program more attractive to lenders by reducing the risk they will have to repurchase loans that go bad.

Chris Delzio, a financial adviser, in May used the HARP program to refinance the $135,000 mortgage on his three-bedroom Palm Bay, Fla., home, even though the value of the property has fallen. The refinancing allowed Mr. Delzio to drop his mortgage rate to 4.375% from 6.625%, for a monthly savings of $247. Mr. Delzio says he tried to refinance last year, but his lender, Wells Fargo, said he needed to come up with about $40,000 in cash because he had no equity.

Even with the changes, the refinance process can be time-consuming. “For a lot of people, it’s a battle,” says Steve Walsh, a mortgage broker in Scottsdale, Ariz., noting that borrowers who are self-employed or own multiple properties can run into problems even if they have good credit and substantial assets.

Clogged mortgage pipelines mean it now takes the nation’s biggest mortgage lenders on average more than 70 days to complete a refinance, according to the consulting firm Accenture, up from 45 days a year ago. Some big lenders routinely advise borrowers that their refinance can take as long as 90 days.

Some lenders, such as Bank of America and J.P. Morgan, are offering HARP refinances only to existing customers. Others, such as U.S. Bancorp, won’t provide HARP refinances to borrowers who owe more than 105% of the home’s value unless they already service the loan.

“We and most other lenders…are very excited to help people out,” says Dan Arrigoni, president of U.S. Bank Home Mortgage. “But if it’s not our loan, we are adding a lot of risk to our portfolio” by refinancing a borrower who is deeply under water and, as a result, more likely to default.

Still, for those who can clear the hurdles, today’s low rates may present a once-in-a-lifetime opportunity. Here are some tips for making your way through the process:

Repair your credit. Pull a copy of your credit report before beginning the refinancing process. “You want to give yourself ample time to clear up any mistakes and put your best foot forward in the qualification process,” says Greg McBride, a senior financial analyst at Bankrate.com. Borrowers with good credit scores of 740 or more generally get the best rates, he says.

Low-income borrowers aren’t the only ones who can run into credit problems. “Someone with a higher score who misses a payment could take a bigger hit than someone with a lower score, because there’s further to fall when they stumble,” says Anthony Sprauve, a spokesman for Fair Isaac, creator of the FICO credit score. Borrowers who have elected not to use much credit can wind up with a low credit score.

Under the Fair Credit Reporting Act, borrowers are entitled to one free credit report from each of the three main credit bureaus—Equifax, Experian and TransUnion—every 12 months. You can request a free credit report at AnnualCreditReport.com or by calling 877-322-8228.

Shorten the loan term. If you are several years into your mortgage, you can maximize your savings by opting for a new loan with a shorter term. Consider a borrower who took out a $200,000 30-year fixed-rate mortgage with a 5% rate in 2009. Refinancing into a 30-year fixed-rate mortgage with a 3.875% rate would lower monthly payments by $177 to $897, according to HSH.com, and provide about $25,000 in savings over the life of the mortgage.

Shift to a 25-year mortgage with the same rate and the payment falls by about $100 less, to $993, but the savings over the life of the loan jump to nearly $50,000. With many borrowers seeking to pare debt, a growing number of lenders now offer mortgages with terms of 25, 20, 15 and even 10 years.

Contact many different lenders. Rates are at historical lows, but the gap between the best and worst deals can be as much as a full percentage point, according to HSH.com. With pipelines near capacity, some large lenders have been raising rates in an effort to hold down volume while boosting profits. Websites such as Bankrate.com, HSH.com and Zillow.com allow borrowers to compare rates from different lenders.

Loan costs also can vary substantially. When Bankrate.com surveyed lenders last year, “origination fees,” which compensate the lender or broker for arranging the loan, ranged from a low of $123 to more than $2,000 on a $200,000 loan, depending on the lender. Getting estimates from multiple lenders can give you ammunition to negotiate a better deal, says Mr. McBride of Bankrate.com.

Even in an era of tight credit, standards vary. Borrowers with good credit scores, who have been on the job for at least two years and aren’t self-employed, and have at least 20% equity are likely to have the easiest time refinancing, says David Zugheri, co-founder of Envoy Mortgage in Houston. Meanwhile, those with weak credit and reduced incomes face substantial hurdles. 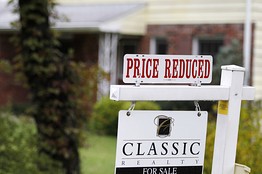 Low appraisals and tight lending standards are making it difficult for many borrowers to refinance.

Jason Russell, a San Francisco mortgage broker, says he approached five lenders before finding one that would refinance one of his clients, a partner in a law firm who had solid finances but couldn’t show two years of self-employment income because his firm recently had been acquired.

Relationships can make the difference. Banks remain cautious about mortgage lending, but some show more flexibility to their better customers. Daniel Goldstine, a psychologist who lives in Berkeley, Calif., says several lenders refused to refinance his $1 million mortgage, even though he has good credit, substantial assets and his home was appraised for about $5 million. Mr. Goldstine says he was able to secure a refinance through Citigroup after making a large deposit there.

“Sometimes we will ask customers to bring additional assets to the bank,” says CitiMortgage president Sanjiv Das, who declined to discuss specific customers. “Then we know you have the ability to pay based on your assets.”

Bank of America is offering more underwriting flexibility to certain customers who have at least $250,000 in assets with the bank or its Merrill Lynch or U.S. Trust units. For instance, a borrower with a company car might be allowed to provide three months of documentation showing that the employer is picking up the expense, instead of 12 months, as is standard.

Write to Ruth Simon at ruth.simon@wsj.com